Innovation and Challenges in the European Media 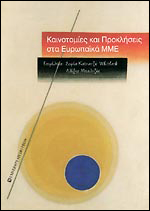 The process of European integration raises several questions about the contribution of the mass media - "traditional" and new alike. In the domain of the mass communication innovation is not only technological or economic. It is social, political and cultural as well. From this point of view innovations represent at the same time challenges.

Considering the developments observed and the perspective of the integration, what are and what might be the future functions of the mass media? To what extent - if at all - might the new communication resources, the content exchanges across the borders, and the interconnections of any kind among Europeans, contribute not only to the viability of this European project, but to the positive or creative development of the europeanness as well? And could europeanness form the basis of a vision for a common identity that will not exclude cultural diversity, but it will establish this very diversity as a common way of life and co-existence among different people? Is it possible that europeanness might be the means to create more constructive economic and political institutions? To what extent might the new media contribute for the democratization of the various forms of communication and especially for the democratization of the society at large?

These and many other relevant questions are discussed in this volume by 23 researchers from eight countries. Given its international profile, the book offers an outline of certain communication phenomena that appear common for different countries. The reader is also given the opportunity to reflect on the extent to which researchers analyze several aspects of mass communication, its importance and functions on a local and on a European level as well, based on their own specific national and cultural backgrounds.

Foreword by Margot Wallström
Introduction by the editors
Part I - Public Sphere, Identity, Integration: Innovation and Challenges on the European and Local Level
Eurocrats, Technocrats, and Democrats: Competing Ideologies in the European Information Society
Peter Golding
The Absence of European Identity as a Function of a Lacking Common Public Sphere and the Political Communications Deficit as a Constitutive Component of the European Democratic Deficit
Sophia Kaitatzi-Whitlock
Why is the European Union News off the National Media Agenda?
Anna Panagiotarea
Translating Europeanness to the Europeans, a Common 'Language' in the East and West
Ruxandra Trandafoiu
Politics, Governance and Security: Rhetoric in the European Public Sphere
Stuart Price
BBC as Mediator of the Public Policy. Reconsidering PSB in the Digital Era
Michael Klontzas
Towards the Potentials of Journalistic Risk Communication to the Constitution of a European Public Sphere
Irene Neverla
Internet and the Construction of the European Identity
Marina Rigou
Integration of Baltic Countries with the European Social Space
Peeter Vihalemm
Part II - The Challenges of Infotainment and Tabloidisation
Tabloidisation of News Media: An Analysis of Television News in Turkey
Mine Gencel Bek
Exploring the Ecological Fallacy of the TV Village
Stelios Papathanassopoulos
Televisual Infotainment and Pre-Election Campaigns - The Case of the Greek National Elections in 2004
Giorgos Plios
Children in the News Media
Cristina Ponte
Part III - Innovation and Challenges in the Domains of the Arts and Culture
War of the Screens: The Economic and Cultural Politics of European Cinema
Gregory Paschalidis
The Mirror, the Window and the Exiled Poet: Images of the Self and the Other in European Media
Eirini Papadaki
New Media and the Arts: Interactivity, Non-Linearity and Reconstruction of the Artistic Communication
Alexandros Baltzis
Coping with Audiovisual Plenty on TV and the Virtual Purchase on the Internet
Carmelo Garitaonandía, Emilio Fernández Peña, José Oleaga
Post-Fordism and Post-Modernity: Personalization and Semiotics in the Case of Mass Communication
Ioannis N. Katsikis, Sevastos N. Christofidis
SMS (Short Message System): A New Way of Communication?
Ifigeneia Mylona
Ending
Toward a European Media Sociology
Peter Ludes
Short biographical notes
Abstracts in English
Index